Energy access is one of the biggest development challenges in Africa today making it a natural priority for the African Development Bank’s High-5 strategic plan. 23 of the 28 poorest countries in the world are in Africa, and yet at the same time, African countries make up 6 of the 10 fastest growing economies as of 2018. Energy – as a driver of economic and social development – has the potential to both address extreme poverty, and accelerate the ongoing economic development.

One technology that continues to revolutionize energy the world over is photovoltaic solar. In sub-Saharan Africa, solar PV alone is projected to contribute over 4% to total generation by 2040. Photovoltaic systems convert the sun’s energy into direct current (DC) electricity. This form of energy can be used directly to power DC appliances or converted into AC electricity to feed AC grids and AC appliances.

Africa has unparalleled potential for maximizing solar as a resource, with most parts experiencing energy levels exceeding 2000 kWh/m2/year. In addition to this, cost limitations continue to become less of a hindrance , as the price of solar systems drops due to a combination of factors ranging from technological progress, and an increase in manufacturing capacity – particularly in China. In 2017, the global average Levelized Cost of Energy (LCOE) for grid-scale solar PV was estimated at 100USD/MWh – a 73% reduction compared to costs in 2010 – with the cost dropping as low as 30 USD/MWh in some cases. 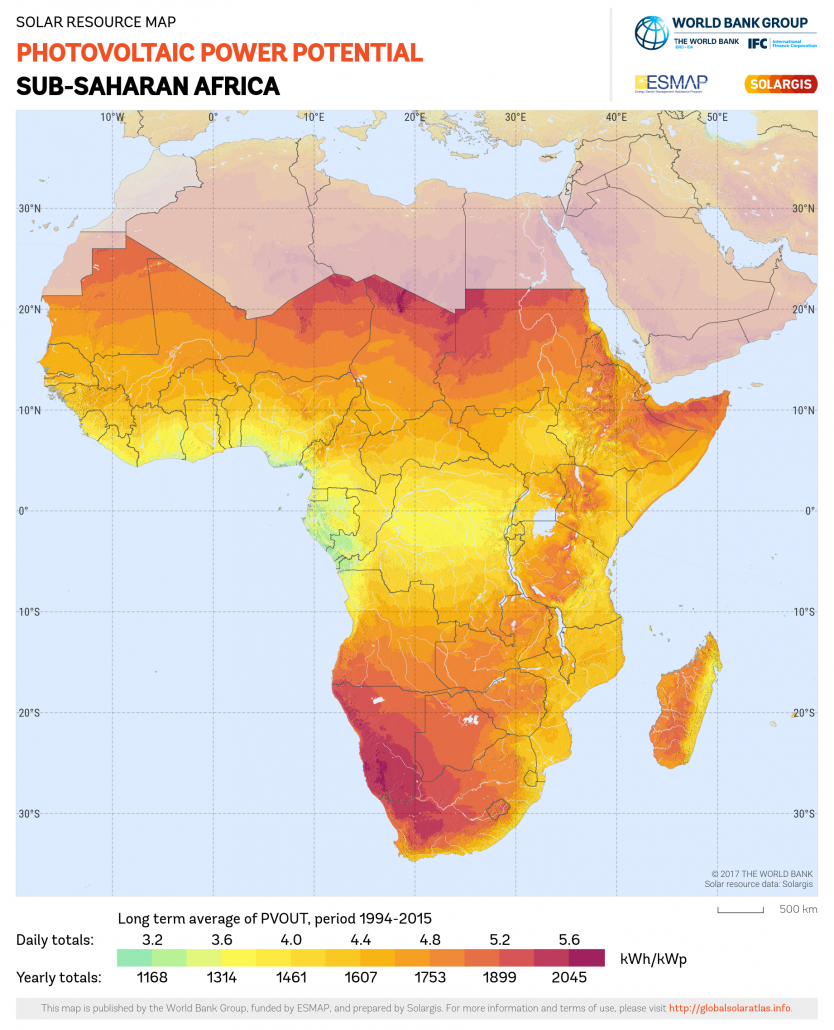 Africa is a continent of stark contrasts. Sprawling cities exist alongside extremely underdeveloped rural areas, and even in urban areas slum conditions and informal settlements persist. The reality of such differences in geography and demographics warrants a differentiation in energy access approaches.

While the traditional route to energy access has been grid extension, alternatives such as mini-grid and off-grid systems are becoming more popular as they are better suited in some cases. . This article examines the various  applications of on-grid, mini-grid, and off-grid solar PV; including the existing challenges and opportunities.

These are large PV solar farms that have been set up to generate electricity which is fed directly into the national grid. A major consideration for these is location, as investors seek to maximize power generation through optimal siting. Such projects also incur costs to set up the transmission infrastructure to evacuate the power generated, although, in many countries, this has been taken up by the national transmission company as a way of incentivizing investment in the technology. These types of investments are also incentivized through feed-in tariffs, which guarantee the return for each unit of power evacuated from the solar generation plant, hence lowering the risk of investment. Grid-scale production requires that the electricity generated be compatible to the existing grid standards. This includes among other, conversion to AC and managing the frequency to sync with the national system.

Challenges: Due to the plummeting cost of solar PV, the LCOE of solar installations is one of the lowest in Africa, making it an obvious choice for investors. However, where countries demand higher reliability and 24-hour supply, solar PV at grid scale ceases to be as economically viable as before as additional investment must be made into back up systems such as storage (batteries), and generators (including diesel).

Considerations: Solar PV has a significant land footprint. Vast amounts of land must be put aside for large grid-scale farms. This is an important consideration within the overarching issue of sustainability as land is a key resource, particularly with the projections in population growth. Land constrained countries should therefore carefully weigh the pros and cons before undertaking such projects. Alternatively, several countries are coming up with innovative ways to co-use the land on which solar farms are built for other activities such as agriculture, among others.

The need for backup power whether through battery storage or alternative sources of electricity must also be considered in terms of cost, and sustainability to ensure that the overall system investment remains viable both financially and environmentally.

Other factors to consider are the overall system stability, and cost of system balancing as the level of intermittent capacity such as solar grows. Countries should ,therefore, carry out detailed system studies on such issues, to avoid unintended disturbances and incurred costs in the future.

Solar is a popular choice for mini-grid systems in Africa due to its relatively low cost, and the abundant resource. Investment in mini-grids in Africa must take into account a number of considerations as described in detail, here. Solar mini-grids, work best where the load can be matched to the availability of solar energy -through businesses that operate during high sun hours,  such as millers. With this kind of arrangement, the solar power generated can all be sold during the day, with small back up generators carrying the smaller night-time load.

Challenges: In short, the intermittent nature of solar  means that some sort of backup must be available to meet the demand in times when the sun is not available. Considerations: Mini-grids running on solar work best where the corresponding load that they serve peaks during the day – when much of what is produced can be evacuated. Therefore operators of these systems must  invest in incentivizing activities that result in this type of favorable load profile.

There are advantages to combining solar in hybrid systems with other forms of energy, including diesel, to lower the cost of power in mini grid applications. An Impact 4 Energy study (2018) concluded  that hybrid systems with PV, batteries, and diesel consistently exhibited lower prices across different load profiles.

Off-grid solar systems are applicable for energy access across different geographies and economic classes. These systems usually consist of a solar panel, battery and various DC appliances; meeting a number of energy needs such as lighting (bulbs and torches), entertainment (radios and TVs) and phone charging.

In rural areas, off-grid systems provide a timely intervention to meeting energy needs, rather than wait on lengthy timelines to deliver on-grid or mini-grid projects. A major barrier for the uptake of stand-alone systems was the high cost. In many African countries, this problem is being addressed by the ingenuity of pay-as-you-go models which allow for system payments in small and manageable installments. However, even despite the high cost of stand-alone solar both rural and urban customers can benefit from the long run savings. These systems provide an alternative to the high connection costs, high electricity tariffs, and in many cases low reliability synonymous with grid-connected electricity.

Challenges: Maintenance is a key issue when it comes to these systems because they are individually used and managed by their owners. To maximize parameters such as battery life and panel efficiency, users must be trained in their maintenance and best practice. For example, avoiding repeated complete discharge of the battery and wiping dust from the panels are necessary to get the most out of stand-alone systems.

Considerations: As off-grid home systems continue to grow in popularity, a major area of focus should be on quality, training and customer service, to ensure that customers get highest returns on their investment. Additionally,, the future of the pay-as-you-go model success is strongly linked to the growth of mobile money payments. The highest growth of this financing model has been seen in East Africa, which has well developed mobile frameworks – although recent taxes levied in Uganda threaten the continued use of the service.

Solar energy has the potential to deliver significant savings and hence improve the quality of life at household level, but this would require a mindset change from the traditional alternative energy sources. Some studies have shown that solar energy systems are linked to increases in disposable income, when they replace alternatives such as kerosene and in some cases diesel generators. Similarly, the cost of travelling long distances to charge phones is overcome by easily accessible solar chargers, which both serve a need, and provide a business  opportunity for their owners.

To further lower the cost of solar energy to end users, governments and regulators have a lot to do in terms of incentivizing investment and uptake. This could be done through setting feed-in tariffs to de-risk investments, and permitting tax holidays and tax exemptions. In Kenya, tax exemptions on solar imports led to  a $3 drop in the price of solar lamps, resulting in a rise in uptake from 37% to 69%.

On the demand side, governments have the ability to encourage or stifle uptake of these through their approach to supporting sectors – such as the telecom industry, and in particular mobile money operators. Some of these indirect actors play a significant role in the eventual performance of solar investments.

Quality remains a major factor in the attitude of Africans towards solar systems. Regulators, therefore, have a critical role to play in managing quality assurance, through enforcing minimum standards and specifications for all equipment.

Ultimately solar PV holds great promise for meeting energy access targets in Africa. The continent’s abundant resource, coupled with ever falling prices make this technology attractive for implementation. However, solar PV is not without  its own unique c challenges, particularly around i intermittency and the high land footprint. These must be considered when designing projects, especially at grid-scale. Mini- and off-grid applications offer ready alternatives especially for rural communities which are not likely to be connected to the main grid in the near future. In these applications, the nature of the load, as well as awareness on best practice to prolong the life of components, and thus maximize the benefits of the system are critical considerations.