According to the Ramsar Convention adopted on February 2, 1971 (the international treaty officially called the Convention on Wetlands of International Importance Especially as Waterfowl Habitat or more commonly Convention on Wetlands), wetlands are “stretches of swamps, fens, peatlands or natural or artificial waters, permanent or temporary, where the water is stagnant or common, fresh, brackish or salty, including expanses of seawater the depth of which at low tide does not exceed six me 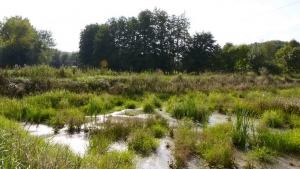 In particular, we can say that wetlands are waterlogged areas that provide functions indispensable to man. They provide 25% of the world’s food (fishing, agriculture and hunting) which is Africa’s main source and fixes 20% of the planet’s carbon. They are therefore a treasure trove of biodiversity, protect against floods and drought.When hayfields and pastures, they have the natural function of retaining river water and preventing floods from flooding homes. They also contribute to the water resource and have a purification capacity that allows them to filter certain pollution. Biodiversity brings together all living things, from microscopic bacteria to the most complex animals and plants and the environments in which they live. By this definition, wetlands plays a capital role in the fight against global warming and their fragile nature make them areas threatened with extinction in many African countries through human activities.

Effect of Climate Change on Wetlands

Reflections on climate change, although it has been in existence for 27 years, referring to  the main international agreement on climate action  adopted in 1992 at the Rio Earth Summit , still remain a crucial topic for the debates at the continental and international level. Africa is not on the sidelines of this debate ; instead, Africa is one of the continent where  effects of global warming are felt in increased ways. “Without reaction, global warming will reach + 1.5 ° by 2030 and Africa is on the front line” is a call made by the IPCC (Known in french as GIEC) in its latest 400-pages report in which the Intergovernmental Panel on Climate Change alert on the urgency of limiting global warming to +1.5 degrees compared to the pre-industrialization level. United Nation experts have studied two scenarios: an increase of 1.5 degrees and an increase of 2 degrees or more. Projections that could change a lot of things for the African continent.  Deterioration of  climate and the increase of  temperatures remain primarily due to the actions of  human activities on theirs environments in general and on wetlands in particular which play a fundamental role in the fight against the climatic change and its harmful effects which are :

The case of Lake Chad remains one of the major cases of effect of human activities on wetlands in Africa. In fact, the Lake Chad does not have contact with an ocean, the watershed of this lake affects four countries: Niger, Chad, Cameroon and Nigeria, it is therefore  the main source of drinking water for about 20 million people from these four border countries. In 55 years, Lake Chad has lost 90% of the surface it occupied. The situation is urgent, because today the lake extends only about 2500 square kilometers. The causes of this environmental disaster are natural, but mostly anthropogenic. The lake is over exploited and the population does not pay enough attention to this large water tank whose situation is precarious. The consequences of the total drying up would be dramatic, there would be no more opportunities to fish in the lake, no more food crops, no more livestock and especially no more source of drinking water. The 20 million people who depend on the lake would be sentenced to famine or emigration.

Taking into account  the   importance of the participation of wetlands in resilience to climate warming in africa  , there is an urgent need to preserve them. However, in order to put in place long-term conservation and planning policies that integrate climate change and wetlands protection, it is necessary to understand how the climate will evolve in each zone and to pay attention to the habits or actions of any community threatening  wetlands preservation. These behaviors must be subject of awareness campaigns to draw attentions to change the mindset of people on what they are doing or their way of thinking (the most common which is to  related wetlands to insect nuisance and water-born diseases). Also, concretes actions should be carry out in order to offer others alternative means to the populations such as the creation of community trash to stop the use of dump which is generally made of wetlands surrounding the places of housing.

Wetlands cover about 7% of Africa and their major benefits are : sponge function to store water in the landscape and to recharge the ground water table ; buffer function for river discharge, maintenance of biodiversity, water purification ; storage of organic carbon and food production, living space and recréation for local population and visitors. Therefore we can enumerate 5 actions to be consider to reinforce their protection which are : Restore, conserve, use wisely, don’t drains, don’t build over and don’t degrade.

Restoration of the forest ecology through agroforestry