With regards to the changing realities around the world over the past decade, the ensuing complexities of societal challenges and the unpredictability of the same, the Department of Energy Engineering at Politecnico Milano launched the Passion for Action program, designed for students to share their knowledge and experience on the SDGs. Masters’ students within the program organized a High School Peer Education Webinar featuring all five student teams under the ISNAD-Africa’s Environmental Education Programme.

The webinar provided an overview of the Sustainable Development Goals highlighting the importance of all round development, taking into account human development and environmental sustainability in addition to economic development which had always been the focus. Countries around the world are faced with different challenges at different levels however, the goals are the same. Hence the need to take actions and have a change of lifestyle in response to these. The understanding that humanity will still have to deal with climate change should inform decisions and fuel passion towards achieving the Sustainable Development Goals.

Food wastage and widespread inequalities at all levels were noted as major challenges affecting the world, causing ripple effects such as environmental degradation, poverty, crime, gender-based violence, segregation based on religion, social and economic class, sexual orientation, racial discrimination and so on. Thus, the onus lies on individuals and groups to take action in form of projects and advocacy programmes at local and international level, and own the narrative.

In the light of taking action for the planet, student teams within the Environmental Education Programme also pointed out various environmental challenges they have set out to address with their projects. These were secondary school student teams from 3 countries across Africa, selected as beneficiaries of up to USD500 grant to execute their projects. The student teams include: the biogas project team in Kenya, the crea8ive planet team in Nigeria, the Spekboom project team in South Africa, the Fruitful Vines team in Nigeria and the Strong Tower team also in Nigeria. 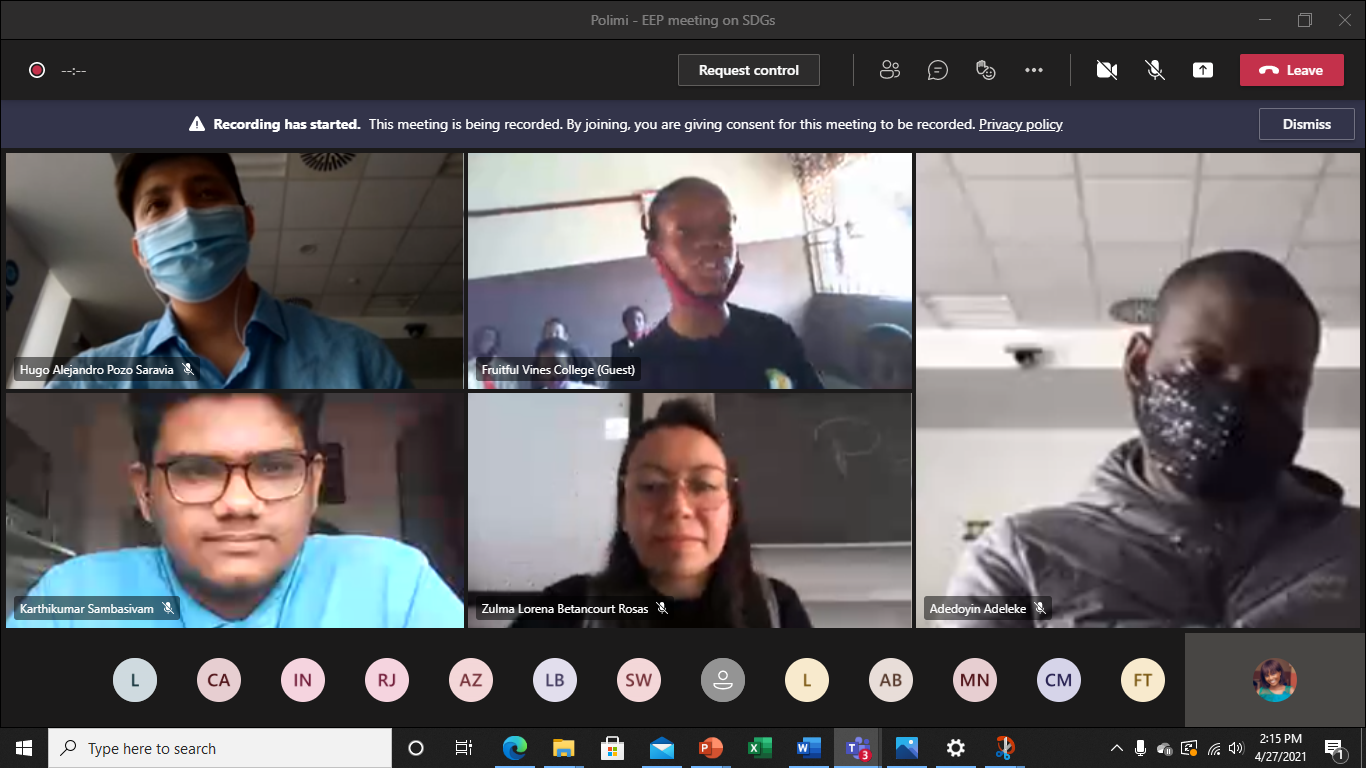 All five projects address environmental challenges such as: overflooding from improper waste disposal, food scarcity from irregular rainfall, climate change and so on. Each team took turns to share their project implementation process, the challenges faced in the process and the outcomes.

In addressing the challenge of overflooding from improper waste handling, the Crea8ive Planet team set out to evacuate about 1.5 tons of plastic wastes from their community. While most of the plastic

waste were directly evacuated from environmental clean-ups, others were gotten from students in neighbouring schools in exchange for study materials. These plastic wastes are then recycled into interlock tiles for the school pavement. Similarly, the Fruitful Vines team set out to build an irrigation channel and a storage barn for agricultural produce using PET bottles. This addresses the issue of low/irregular rainfall and food wastage in their community. The channel was formed by cutting and fitting the bottles, positioning the channel to supply water and drip over the soil. About 5,000 PET bottles was evacuated for the project, also from community clean-ups and donation from students.

In a bid to reduce the usage of firewood in their school kitchen, the project team from Nakuru Day school in Kenya resolved to generate biogas from manure. The implementation process involved the installation of a biodigester and feeding it with manure from cows also owned by the school. After feeding for a couple of weeks, the gas built up and was ready for use. Also, with the aim of reducing the use of chemicals in crop production in order to promote healthy food consumption and a healthy ecosystem, the Strong Tower team embarked on setting up an organic garden. The team carefully and strategically selected plants like; the red clover which is extremely drought-resistant and Jute, which absorbs carbon dioxide (CO2) from the atmosphere.

The spekboom team from Imagine Scholar, South Africa discovered an indigenous carbon sequester plant called spekboom. A BBC article titled “How Shrubs Can Help Solve Climate Change” describes more of the benefits of spekboom. The team has cultivated over 200 of the plants and has begun distribution to families within the community while training others to do the same.

Through team work and community engagement, these students have been able to provide innovative solutions through their projects while receiving guidance from their various project Advisors who are also experts in the field.

It therefore goes without saying that, achieving the SDGs vis-à-vis environmental sustainability is human-centered hence the need to take action and facilitate civic engagement through peer-to-peer learning leveraging technology.