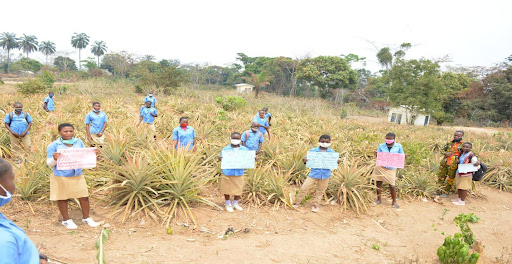 This project was very successful based on the objectives; club members were taught the cultivation of pineapple, they gain basic skills of conservation and economic sustainability. By 2019-2020, we started a fruitful partnership with ERuDeF when they introduced us to Environmental Education and a six unit curriculum to help us better understand local environmental challenges and how to cope and solve some of these challenges by acquiring skills of advocacy. The club was then called Environmental Education Club. 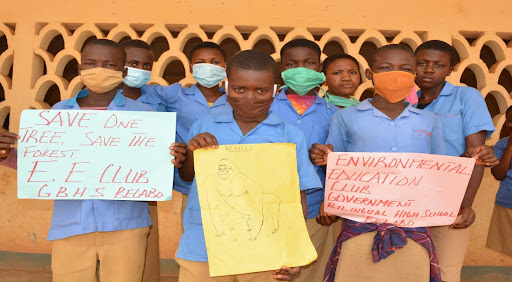 The participants did not however complete the curriculum because of the challenges of Covid-19, however the students gained a lot from the first two units of the curriculum they did. 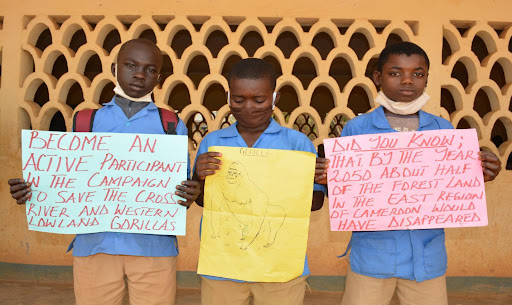 At the dawn of 2021 we applied for the EE grant of ISNAD-Africa with the help of  ERuDeF so as to take up better steps and strategies to carry out sensitisation and advocacy on challenges of deforestation and Climate Change .

We elaborated the importance of a clean and healthy environment, differentiate between biodegradable and non-biodegradable waste, the five Rs in waste management and how we shall apply this skill in our school and beyond. The following week we carried out an outdoor activity of sensitizing the students of the school on the dangers of poor waste management, the process of using grass clipping to produce manure. All of the 25 present understood and could interpret with explanations the types of waste we have on our school campus and they can classify these waste into two groups with measures of how to effectively dispose of them. They can also domestically produce manure.

The specific objectives are to prepare the participants for a wider understanding of the negative role of poor waste disposal and management, and to develop skills which will help them in further activities in the management of waste, it was also intended to build the sense of responsibility and advocacy in the participants to better engage in environmentally friendly practices. Students should acquire basic technics to locally produce manure using death leaves, grass clippings etc.

-By the end of the session, all the students should be able to identify common waste on the school campus of GBHS Belabo.

-Sensitize the about 1000 and above of youth during the National Youth Day celebration on the damages of deforestation.

-Able to change the views of students and actively engage them in the fight against deforestation.

-Classroom lecture with questions and answers was used especially during the first session. 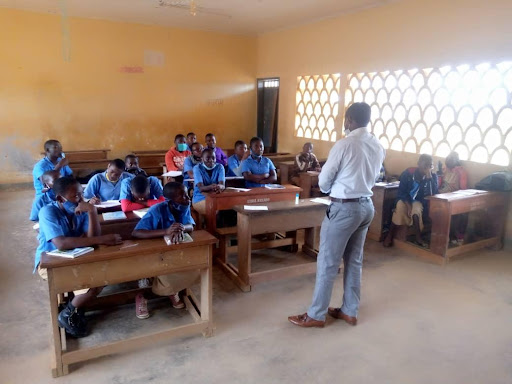 The Coordinating Teacher and the EE Club Participants GBHS Belabo 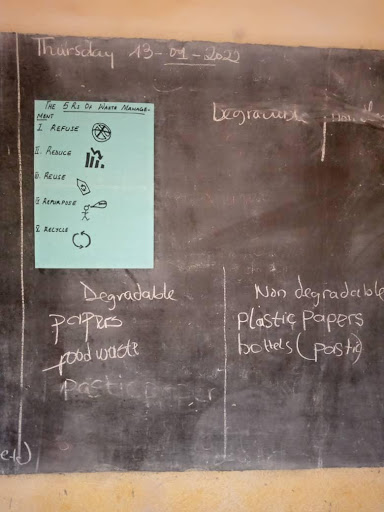 Participative approach and manual work was also used during outdoor activities sessions to prepare the terrain for the school garden and planting of trees to fight against deforestation. 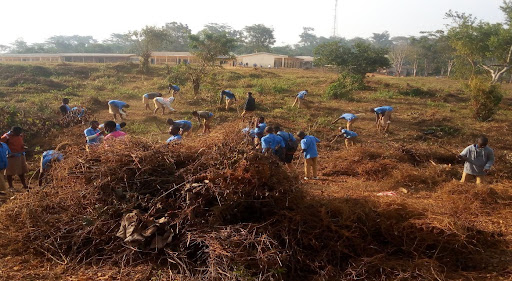 Competent based approach was essentially used where the students will learn from family of situations before proposing solutions. Lectures and sensitization of students by members of the EEC 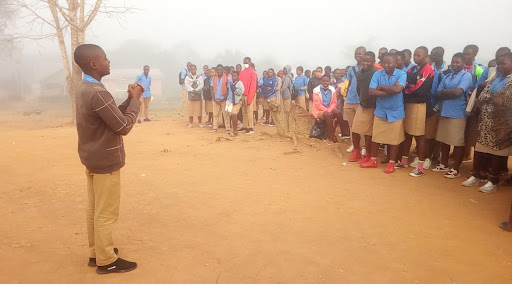 Student Advocacy, head of the EE Club lecturing on waste management on the school campus 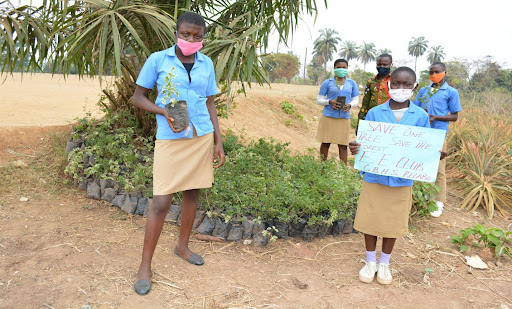 Outdoor activity of the EEC 2021, creation of flower lawns on the school campus 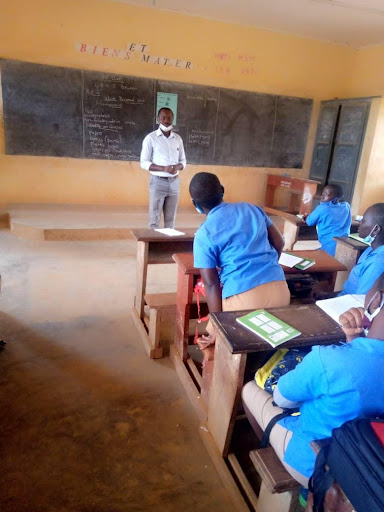 Outdoor advocacy during public ceremonies, with  messages to better equip the youths and especially the club heroes for a foundation of an advocacy career. 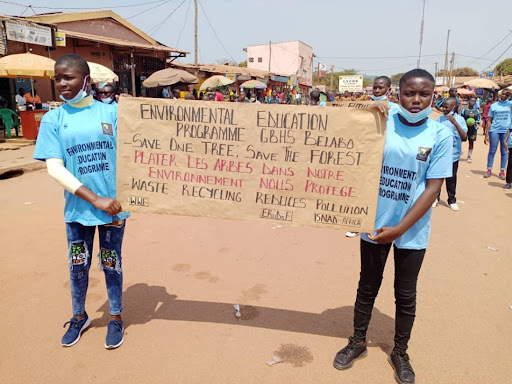 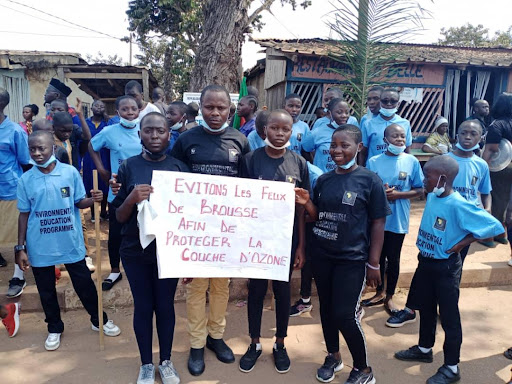 With the presentation and definition of terms which were new to some participants, the exercise became interesting to them, because all the participants could easily identify the different types of waste. 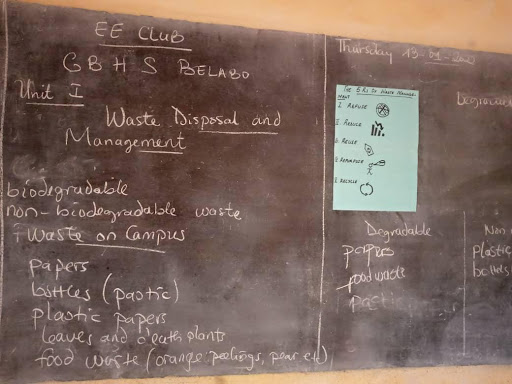 We then classified the waste into two categories and concluded that, trash cans will be placed in front of our classes with different colors. The green cans will be for degradable waste while the red cans will be for non-degradable waste. The participants will then sensitize their mates on the usage of the trash cans, meanwhile the EE Club Heroes decided to organize themselves placing leaders to always supervise the usage in front of each class and report recalcitrant students who do no respects the proper disposal method to the administration.

The students proposed that, it shall be easy for them to adopt REDUCE, REUSE and RECYCLE as a management strategy. They will reduce producing too much waste from their daily school life acclivities and recycle the waste produce to manufacture manure for fertilizer which will be very useful as a natural input fertilizer for their garden, which is also one of their activity in their project.

As for non-degradable waste like plastic, they also accept to send a correspondence to the local council authority to help in transporting this waste to the municipal dumping site which is far off the school campus.

The next two weeks we started delimiting our parcel of land for our garden, we used local farm utensil like cutlasses, hoes, racks and ropes to effectively measure the parcel.

Student cleaning the parcel and gathering the grass into hips

After that week we started with the decomposition of the grass. This was actively engaged during the fourth week of the activities. The process to produce compost was initiated using grass, saw dust and water. Nitrogen was to be gotten from grass, death leaves to provide carbon, and water. We were to check our heap of grass for our process every day to add water since we are in the heart of the dry season. 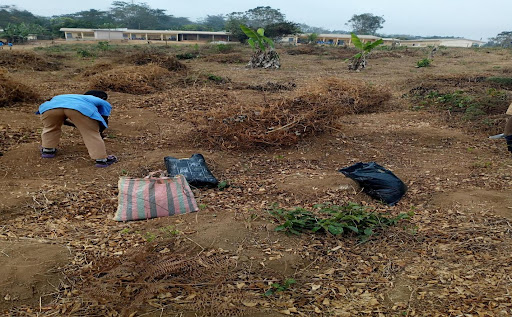 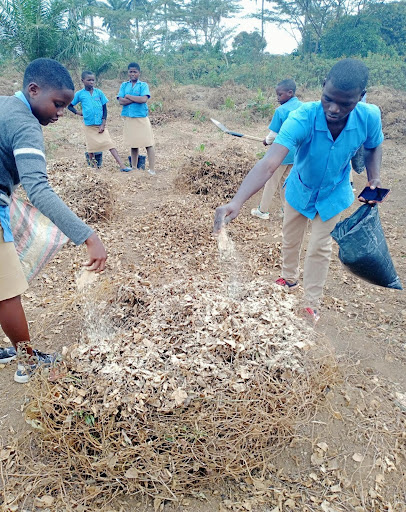 To further limit the effect of the scorching sun, we used palm fronts to cover our grass. 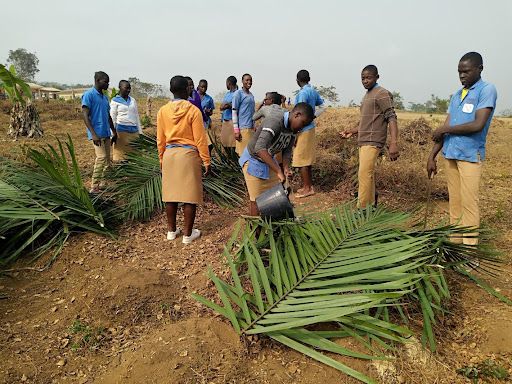 Another outdoor activity was the lectures and education of the school by club member on the importance of proper waste management, negative consequences of deforestation and water pollution. They were excited to address their friends on environmental issues using both the English and French languages.

During the Youth Day Celebration, we were actively involved in the match pass to create awareness of the existence of the EE Club in GBHS Belabo and its involvement in environmental sustainability, fight against deforestation and climate change. Placards were carrying messages on deforestation, climate change. 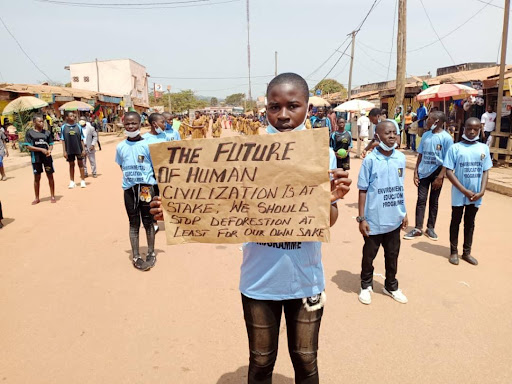 -During the school students’ cultural evening, two club members presented a poem entitled ‘Mother Earth’ their performance was impeccable and their message conveyed in both of our official languages to reach a wider audience.

-Due to the engagement of the members in the project and their determination to carry out advocacy a far and wide and also start up a dream of building a career,  they all contributed half of the sum for the production of their t-shirts to add to the six given to them by ISNAD-Africa, so that, their participation, identification and impact in activism should be greatly felt in the community and especially during the National Youth Day celebration. 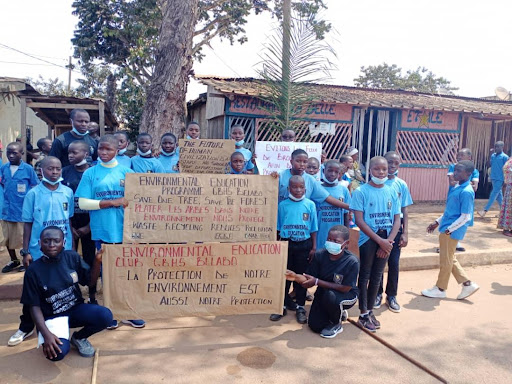 EEC members after their display at the grandstand 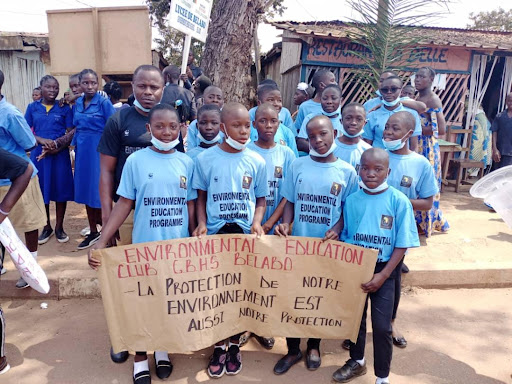 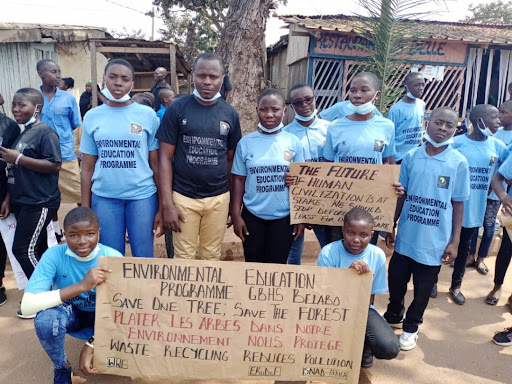 EE Club Coordinate and his participants  during the celebration

It is very important to point it out that, the members of the Environmental Education Club in GBHS Belabo are very engaged in this initiative, they are happy to come out with solutions and ideas to better convey the message of advocacy against deforestation and climate change. They show satisfaction to belong and are willing to apply what they learnt in their houses and communities. It is clear that these heroes will be very determined to take up careers in environmental advocacy

We thank the efforts of the CEO of ERuDeF, Mr Louis Nkembi and Mr Nchanji Roland who have been working to help us in the commencement of our project activities. Our profound and immense appreciation also goes to the ISNAD-Africa team and WWF for granting us the opportunity and funds to effectively embark on our E.E. Club Project.