We had a Teach-In Event in our school with 34 students, 7 staff and 2 guests in attendance. 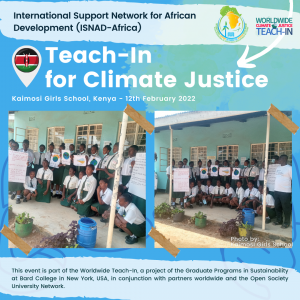 We had two breakout sessions which were really engaging and interactive.

For the first session, the participants were given topics to discuss in their various groups and each group was provided with marker pens and cardboards to record what they had discussed.

Climate change refers to long term shifts in temperatures and weather patterns. These shifts may be natural, but since the 1800s, human activities have been the main driver of climate change, primarily due to the burning of fuels (like coal, oil and gas), which produces heat trapping gasses.

Burning fossil fuels generates greenhouse gas emissions that act like a blanket wrapped around the earth trapping the sun’s heat and raising temperatures.

Examples of greenhouse gas emissions that are causing climate change include carbon dioxide and methane. These come from using gasoline for driving a car or coal for heating a building, for example, clearing land and forests can also release carbon-dioxide. Landfills for garbage are a major source of methane emissions. Energy, industry, transport, buildings, agriculture and land use are among the main emitters.

People are experiencing climate change in diverse ways. Climate change can affect our health, ability to grow food, housing, safety and work. Some of us are already more vulnerable to climate impacts, such as people living in small island nations and other developing countries. Conditions like sea level rise and salt water intrusion have advanced to the point where whole communities have had to relocate and protracted droughts are putting people at risk of famine. In the future, the number of ‘climate refugees’ is expected to rise.

Causes of climate change include; 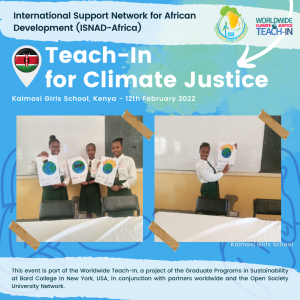 The air is full of water, even if you can’t see it. Higher in the sky where it is colder than at the land surface, invisible water vapor condenses into tiny liquid water droplets-clouds. When the cloud droplets combine to form heavier cloud drops which can no longer float in the surrounding air, it can start to rain, snow and hail. Precipitation is water released in the form of rain, freezing rain, sleet, snow or hail. It is the primary connection in the water cycle that provides for the delivery of atmospheric water to the Earth. Most precipitations fall as rain. For precipitation to happen, first tiny water droplets must condense on even tinier dust, salt, or smoke particles, which act as a nucleus. Water droplets may grow as a result of condensation of water vapor when particles collide. If enough collisions occur to produce a droplet with a fall velocity which exceeds the cloud droplets updraft speed, then it will fall out of the cloud as precipitation. This is not a trivial task since millions of cloud droplets are required to produce single rain drop. A more efficient mechanism (known as the Bergeron-Findeisen process) for producing a precipitation sized drop is through a process which leads to the rapid growth of ice crystals at the expense of water vapor present in a cloud. These crystals may fall as snow, or melt and fall as rain. 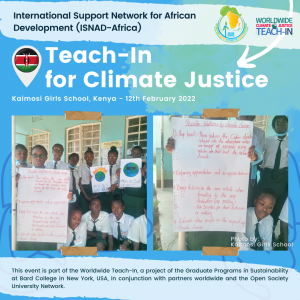 For tens of millions of Africans, drought has become an ever-present natural disaster. Events such as moderate to extreme drought conditions that covered more than half of the mainland of Africa in 2012, the mega drought in Turkana, Kenya that continues up to today have kept dry spells in the news spotlight and kept drought impacts-strict water conservation measures, crop failures, and fears that dried up vegetation will spark dangerous wildfires-on people’s minds.

That is particularly true in East Africa, because of the large semi-arid and desert climates, droughts are natural occurrences across the region. However, regional climate isn’t the only culprit in drought activity, climate change, namely rising average temperatures driven by human generated emissions of heat trapping green greenhouse gasses is contributing to droughts too.

Global warming increases the risk of drought in several ways. For one, water generally evaporates more quickly at higher temperatures. For that reason, hotter weather can result in drier soils, as high air temperatures sap liquid water from soils and plant leaves, transforming it into atmospheric water vapor via a process called transpiration, ground level drying will increase in some regions. 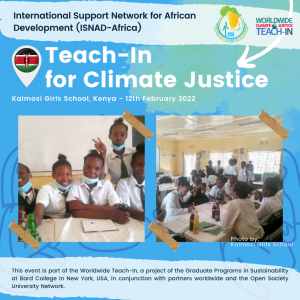 A growing number of communities both coastal and inland are finding themselves under water. Extreme weather, sea level rise, and other climate change impacts are increasingly to blame. Floods are the most common natural disaster in Africa. They have brought destruction to every state and nearly every country, and in many areas, they are getting worse. As global warming continues to exacerbate, sea level rise and extreme weather, our nations’ flood plain are expected to grow by approximately 45 percent by centuries end.

The third session was a panel session which was coordinated by Mr.  Enos Njogu with two students from each group. Each group responded to questions relating to the ways of mitigating climate change in relation to the sustainable development goal.

From this session, it was a consensus that, some of the most promising ways to mitigate climate change are what we call “natural climate solutions”: the conservation, restoration, and improved management of land, in order to increase carbon storage or avoid greenhouse-gas emissions in landscapes worldwide. 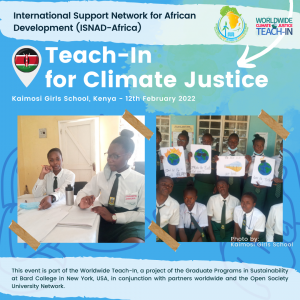