In line with the recent call by the United Nations on governments to build back better by developing a just and green post–COVID-19 economic recovery, ISNAD-Africa in partnership with WWF implemented the Africa4Nature Health Initiative (Phase II). The second phase of the initiative builds on its first phase. The initiative:

The initiative conducted desk research through which relevant information about the impact of COVID-19 in Africa and the post COVID-19 recovery plans of governments across the continent. The study was conducted giving an overview of Africa as a continent and dedicated focus on each of the five sub-regions on the continents: namely, North Africa, Southern Africa, West Africa, East Africa and Central Africa. Case study of worst hit countries in each of the regions was also covered in the desk research.

Based on the information retrieved vis-à-vis the call and need to build back better, the campaign advocated that governments African governments develop just and green post-COVID19 recovery plans and offered policy recommendations. Social media messages were drafted and developed into infographics to increase attention and impressions made by the messages shared on social media platforms that were used for the campaign, namely; Twitter, Facebook and Instagram. The advocacy was implemented through social media campaigns using a multi-dimensional and multimedia approach. The campaign (#Africa4Nature, #AfricaBuildBackBetter) was implemented with tweets and posts which reached about 1,458,651 people.

Many of the posts were “Liked” and “Retweeted” by high level stakeholders including UN Biodiversity (@UNBiodiversity), UNEP Regional Office for Africa (@UNEP_Africa), EU Climate Action (@EUClimateAction) among stakeholders. Based on the initiative and the content being published, some of the stakeholders also followed ISNAD-Africa social media account being used for the campaign. These show their level of interest and support for the initiative. 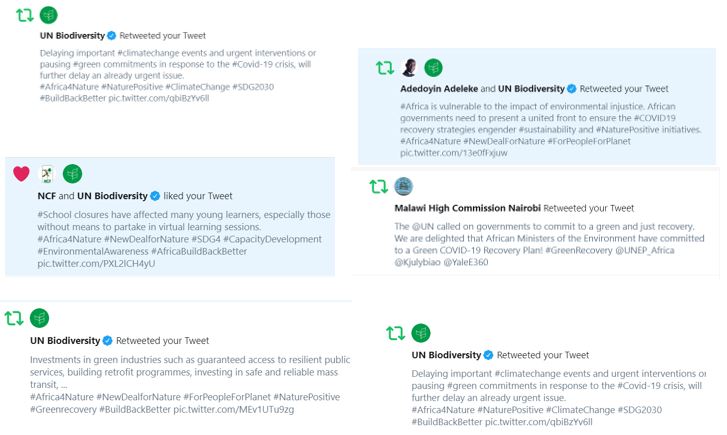 In view of engaging with stakeholders to discuss the various effort towards a green and just recovery post COVID-19 including policy recommendations, the initiative hosted two TweetChats. The first hosted the Steering Committee of the Global Youth Biodiversity Network (GYBN), the official youth constituency of the United Nations Convention for Biological Diversity (UNCBD). The online engagement discussed the implications of COVID-19 on Nature and the role of the youth in the effort towards a New Deal for Nature and People. 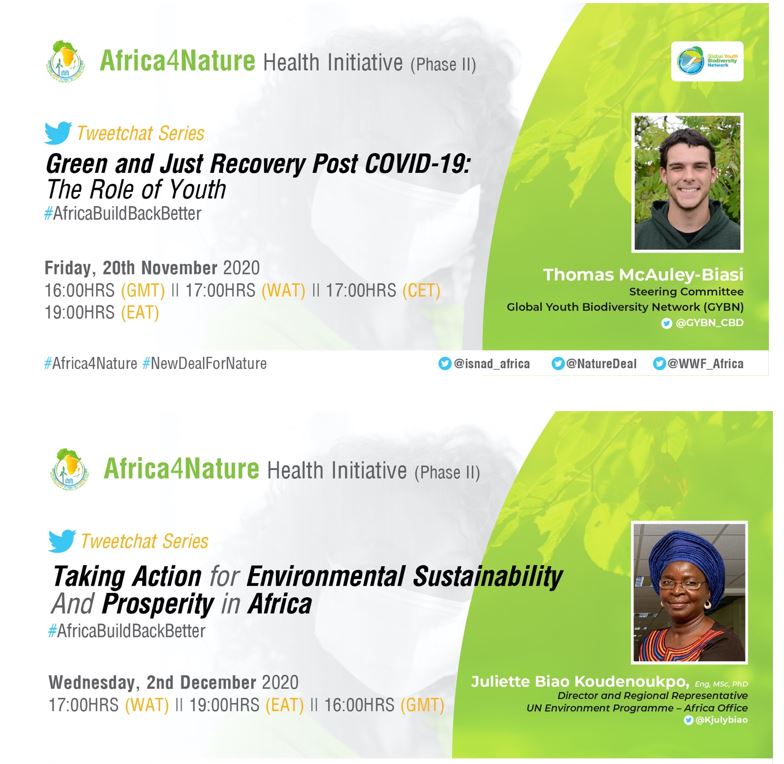 The second TweetChat hosted the Regional Director for Africa of the United Nations Environment Programme (UNEP) and a former Minister of the Environment and Nature in the Republic of Benin, Dr. Juliette Biao Koudenoukpo. The TweetChat was organised during the 8th Special Session of the African Ministerial Conference on the Environment (AMCEN) which hosted the ministers of the environment and other stakeholders from across the continent. The TweetChat focused on the role of AMCEN, which is domiciled at the regional office of UNEP in Africa and its efforts toward green and just recovery post COVID-19 in Africa. The online engagement also zoomed in on the proposed Africa Green Stimulus Programme which is aimed at contributing towards catalysing green growth across various sectors of the Africa economy. The outcome of the TweetChat has been published by Guardian Newspaper, a leading Newspaper with wide readership by policymakers in Nigeria. Details about the publication and other newspaper publications from the initiative has been documented in subsequent sections.

The campaign was reported in four (4) news stories on frontline newspapers such as Guardian Newspapers (Nigeria), and World News Monitor (Austria).  Please find some links below: