Bushroh Abdulazeez is a student of crea8ive planet, 15 years old and the project leader of the environmental education program. Bushroh has now able to take care of her environment successfully, tell people around her and most importantly the people she met during the program line has given her more exposure to think outside the box. Bushroh also mentioned that she learnt how to manage risk, try new things and giving thanks the ISNADAfrica for given us the opportunity to bring the idea into live. 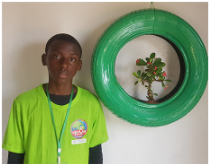 Abdulhameed Olayemi is a student of Crea8ive planet where he learns crea8ive art, a 14 year old, his passion for creativity drives him towards many positive things. Abdulhameed said ISNADAfrica really impacted and equipped him for environmental education which he can also pass on to other people, he mention that the most important area to him is where advisor and associate gives their support and track their progress that he made him serious. He thanks ISNADAfrica for supporting the idea and promise to continue impacting people about environmental education.

Promise Dalero is also 15 years old, known as the operating officer of the project. Promise has been making art and craft out of pet bottles which made him understand varieties of pet bottle. He mentioned that the EEP program is a blessing to them; it allowed them to successfully carry out the project. Promise said the project is quite challenging and interesting it gives him the sense of belonging and ISNADAfrica has given him the exposure he never thought of, to meet new people and to learn new things. Thank you ISNADAfrica!

Hanatu Abdulhakeem is a student of crea8ive planet, 13 years old, passionate in craft work. Hanatu said the most importantly what he has got from ISNADAfrica is exposure, ability to learn new things, to meet new people around the world and communicate and bringing given us the opportunity to bring this idea into being. Hanatu really thank ISNADAfrica for the good work they are doing.

Muhammad jamiu AbdulAzeez is a student of crea8ive planet where he learn graphic design, he proves to be the professor in the team. Jamiu never thought ISNADAfrica could take them this far, he was amazed and excited to be among the students to carry out the project. He mentioned the project is really interesting and he won’t stop solving the pressing environmental challenges. He said he has been able to teach other students environmental education and recycle some plastics. He thanks ISNADAfrica for given us the opportunity to try new things.