This Teach-In Event hosted 100 students, 9 staff and 11 guests in attendance from all the schools involved. 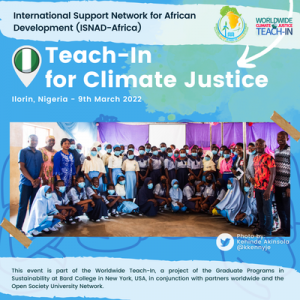 There were three breakout sessions, which were engaging and educative.

For the first break out session, the students were given topics to discuss in their various groups and each group was provided with cardboards and markers to write their group discussions. 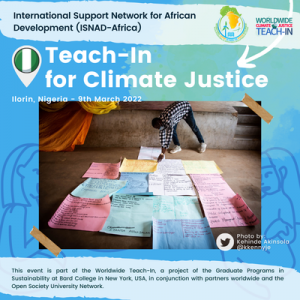 Group 1 was given Solar Power as their topic, according to the students, they stated that Solar Power was first used in 7th century B.C, then it was officially discovered by Alexandre Edmond in the year 1839. The students also came up with facts about Solar Energy like; it is the most abundant source of energy, it is a free energy and a renewable energy, it produces no pollution, it improves world health, it does not affect climate change, it gets its power from the sun. 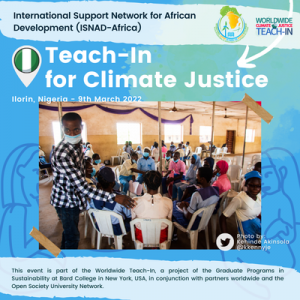 The second group was given the topic, “Reducing Food Waste” and the students were able to came up with these points from their discussion; excess food can be used as manure to improve soil fertility instead of wasting the food. Food preservation is another way to reduce food waste, also people should be advised to cook the quantity of food that will be enough for the family without excess that will later waste. Excess food should be given to the needy and homeless. 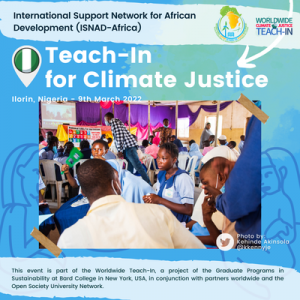 “Local Actions – what is happening in your community and how students can be involved” was the topic given to group 3, the students were able to discuss together and agree on the following local actions: 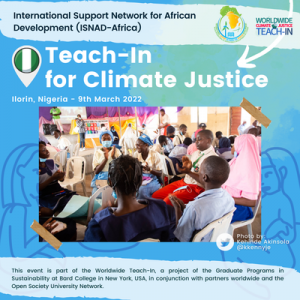 Group 5 discussion was on “Story Telling and Climate Communication”, the group was first taught the basics of storytelling and climate communication, and importance of telling climate change story. The students told the story of flood as one of the effects of climate change using the last year incident in Ilorin where schools were flooded and prevented children from attending schools for weeks. “Protecting the Forest” was the topic for Group 6 and the group members were able to came up with ways of protecting the forest, which are:

The last group, Group 7 was also tasked to discuss “Local Actions – what is happening in your community and how students can be involved”. The students were able to come up with four actions they can get involved with, which are:

For the second breakout session, the students were asked the same question across all the seven groups which was for them to “Identify climatic problems in their schools and communities, and collectively find solutions to the identified problems.

Group 1 was able to identify global warming, carbon offset, erosion and depletion of ozone layer as the climate change problems in their schools and communities. They were able to come up with solutions to the problems such as;

Group 2 identified problems were; erosion, bush burning/waste, deforestation, disposal of waste into drainage, inadequate refuse bins and global warming. The group was able to come up with these solutions;

For group 3, their identified problems were; burning of refuse, erosion, lack of electricity, lack of water supply and lack of toilets in schools. They were able to come up with these solutions;

Group 5 identified problems in their schools and communities which were; erosion, deforestation and burning of refuse. They were able to come up with these solutions;

Group 6 was able to identified two problems, which were; erosion, and bush and refuse burning. The solution provided by the group were;

Group 7 problem identification was different from the other groups, which were erosion, wastage (dumping of refuse), rise in weather temperature, wind and shortage of food. Their solutions for the problems were;

The third session was a panel session, coordinated by Olaide OLAWUWO with two (female and male) students each from the five participating schools.

Each school responded to questions relating to their learning environment within the context of sustainable development goal (SDG) four – quality education; climate action to their environment; renewable energy and its effect on taking action as climate champions.

Participants also chose any sustainable development goals (SDGs) and shared thoughts on climate effect, as well as discussed the roles of climate change champions in taking action for better world.