We had a teach-in climate and justice event in our school with 62 students, 4 staff and 2 non-student or staff in attendance. 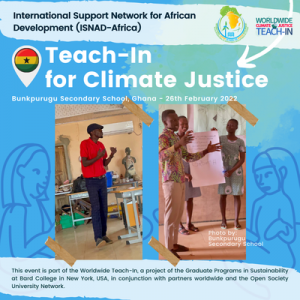 We had two breakout sessions but before the first break, we interacted with the students and got their views on what the following were; temperature, weather, climate and change. Groups were formed and they were asked to define what climate change is.

The groups were able to define climate change as this; Climate change is the variation in atmospheric weather condition over a long period of time. It is the change that occurs to our environment due to activities by humans which deteriorate the natural makeup of the environment.

It also refers to the change in the weather patterns of a particular place over a long period of time.

Climate change refers to the change in the natural make up of our environment and atmosphere.

The second breakout session also started with a question which was “what are the human activities that leads to climate change? and explain ways of controlling climate change.”

The answers the students gave were;

To control climate change, they provided the following; 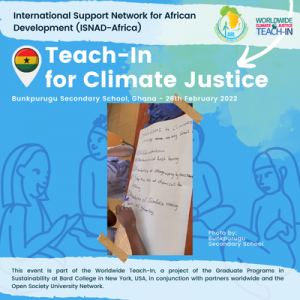