There were 40 students, 8 staff and 2 non-student or staff in attendance at the Teach-In Climate and Justice Event we had in our school. 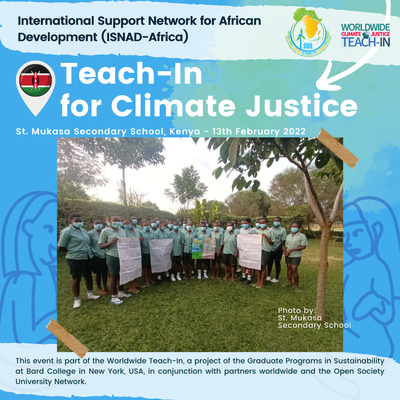 There were interesting and engaging three breakout sessions.

In groups, students were given different thematic areas to discuss with the provision of cardboards, pens and markers to write their group discussions.

Group 1 focused on the introduction and causes of the climate change. The students defined climate as the atmospheric changes in the environment for long period of time and climate is also the average weather conditions over a long period of time, like 35 years. Whatever man does today will affect many generations to come, about 30 years to come.

Another definition given to climate change is that it is the alteration of the normal climate of the place or region and it is the long-time change and shifts in the weather patterns and temperatures. What came out so profoundly, was the fact that there is the shift of the pattern from the normal, that these shifts are not abrupt, but rather gradual. This is evidenced by the gradual change of the climate pattern.

Group 2 focused on signs of climate change. Apart from the available data in the society that climate is changing, there are elements that show truly that climate is changing and really changing fast. These signs are; higher temperatures, prolonged droughts, snow melt and increase of melt like on Mt Kenya, reduction of the snow-capped mountains and shrinking sea ice, wild fires, extremely high rainfall and food insecurity. What is equally clear is that these effects in form of signs are cutting across the counties, counties that were dry have become drier while counties that were wet are having perpetual floods.

Group 3 discussed on the local actions bringing about the effects like burning of the fossil, deforestation, erosion, burning as a method of clearing the land.

Group 4 discussed the remedies to the climate change. Students gave local remedies that can be done by students at school level and those that can be done at national or global level. Local remedies like advocating against deforestation, avoiding outdoor refuse burning, avoidance of water pollution, prevention of bush burning were suggested.

Controlling of what is being emitted to the atmosphere through industries’ chimneys by imposing very strict laws for them to abide by, usage of electric cars and trucks as they give out no dangerous carbon. It does not give out smokes that can be dangerous to our ozone layer that cause global warming which is dangerous to human health. These were considered to be some of the global remedies.

The groups had a consensus that forests had vital importance on the control and shift of the climate and therefore its areas that is worth investing in especially in terms of the management and conservation. Video watched was on Nasa YouTube about climate change and 10 minutes short documentary video on oceans and how it has been polluted and therefore causing danger to the marine organism.

For the second break out session, Group 1 was asked questions about what ozone layer is and the gases responsible for its depletion. Ozone layer is the zone that sits in the stratosphere between 15km and 30km above the earth, and shields us and other living things from the sun’s harmful ultraviolet radiation.

These gases are called greenhouse gases they are; Carbon-dioxide which is produced mainly from burning fuels and also during the volcanic processes, Methane produced from the rice husks and ruminant animals, Nitrous-oxide produced by human activities such as agriculture, fuel combustion and waste water management and CFCs produced by the refrigerators. They came up with solutions to ozone layer depletion such as; encouraging afforestation and reafforestation, stopping burning of fossils fuels and bushes in the schools and communities.

Group 2 identified problems were erosion, bush burning/waste, deforestation, disposal of waste into drainage, inadequate refuse bins and Global warming. The group was able to come up with these solutions; recycling of waste products, planting of trees, sanitation consciousness, provision of more refuse bins.

Group 3 identified the main recurring consequences of the climate change. They identified the following; marine death including fish and other crustaceans, forest fires caused by extreme high temperatures, floods caused by extreme high rainfall that may be torrential, el nino which is climate pattern that describes the unusual warming of surface waters in the eastern tropical Pacific Ocean and migration of the flamingos from lake Nakuru to Bogoria because of the climate change.

The third session was a panel discussion where all the four groups were merged to share and polish the ideas discussed in the various groups. The pertinent discussions were what the solutions to the climate change are, what the practical solutions students can offer to save the world from climate change are.

The students discussed on how carrying out afforestation in school through scouts and geography clubs, carrying out reforestation, carrying out proper disposal of the plastics if any, including the used pads, carrying out campaigns and sensitizing the community about how climate change is affecting us in negative ways, using of public transport and avoiding many personal vehicles to cut on combustion and release of more CO2 into the atmosphere are the solutions to climate change.

Those solutions are mechanisms that can be put in place to end climate change.

During the panel discussion, it was expeditely agreed among all members that, yes, students can end climate change. This is because being taught and taken through such curriculum empowers them to empower the illiterates and in so doing,  they become the ambassadors to the end of the climate change. 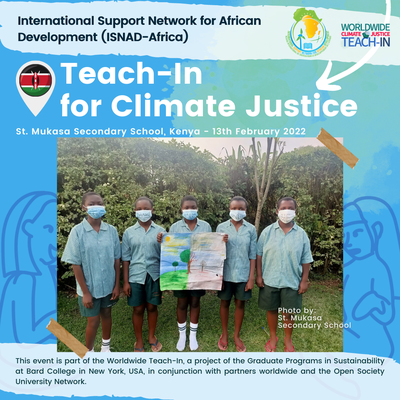